I am the founder of R.I.S.E. Academy, Rebecca Chambers, and I am so excited to launch our first year of virtual alternative high-school.  R.I.S.E has been something I’ve dreamt of for years and it’s finally happening.  Over the past 17 years I’ve been an educator in the traditional public school system fighting for change. Change is coming, but not fast enough.

Offering a unique approach to learning and obtaining credits that go towards the Ontario Secondary School Diploma, youth who join R.I.S.E. can take one or more courses all while continuing to be part of their home schools or homeschooling programs.  R.I.S.E. was created to complement traditional schooling, not replace it.

Each course will be inquiry-based, following the Social Change Maker Model.  Throughout, students will discover their strengths, motivations, and passions. While doing so they will acquire valuable skills required for the Fourth Industrial Revolution (4IR). By connecting with their community and co-creating passion projects with facilitators, each student will become a Social Change Maker (read more about the SCM Model here).

I can’t wait to see all the amazing things you do at R.I.S.E. Academy! 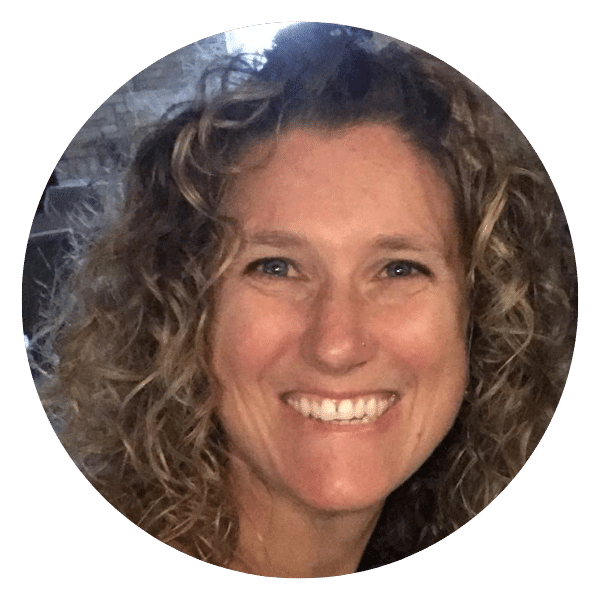 At R.I.S.E. we believe that the current provincial education system is inadequately preparing students for the current political and socio-economic climate and is disproportionately harming marginalized groups.

Our mission is to provide quality education for Ontario students that centers their passion and strengths while fostering critical awareness, critical hope and community engagement.

To reduce and remove the hierarchical systems that are embedded within the traditional education system model and level the playing field for historically marginalized students.

Our current education model, created for the time of the industrial revolution has not changed or kept up with our ever changing world.  It is time to change things up and teach our young people how to use the technologies of the 21st century along with how to use their voices to make a difference in their world.  All courses at R.I.S.E. Academy will offer a model that focuses on working on global competencies that are required to be successful in our ever changing world of work.  These include critical thinking and problem solving, innovation, creativity, and entrepreneurship, learning to learn/self-awareness and self-direction, collaboration, communication, global citizenship and sustainability  Students will work on things that matter to them by finding issues in their world that breaks their hearts, they will research those issues in depth, they will create solutions to those problems, they will connect and network with people in their communities and they will implement their solutions and make a difference.  They will become social change makers. 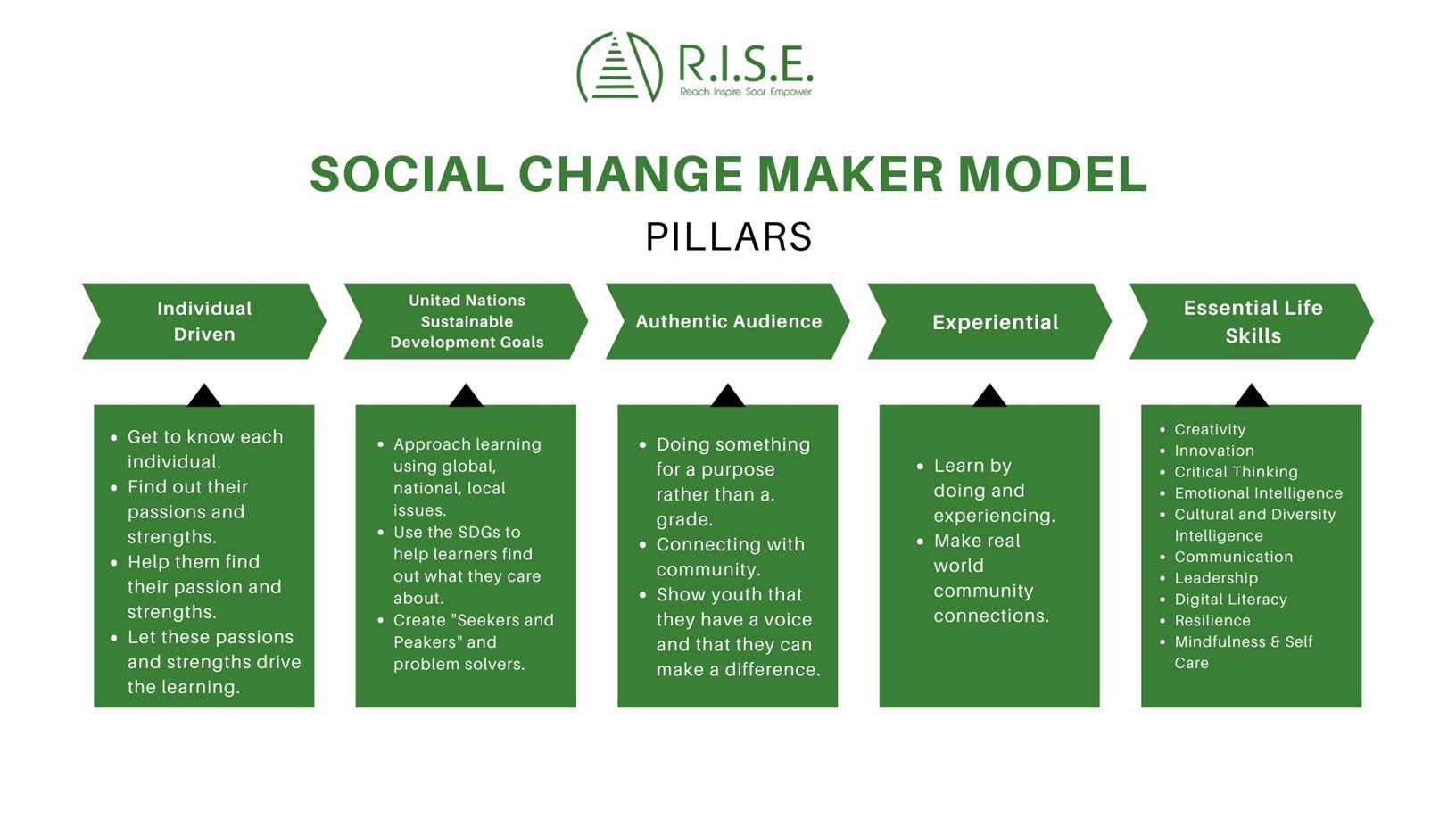 The Social Change Makers model was created in accordance with Community-Connected Experiential Learning A POLICY FRAMEWORK FOR ONTARIO SCHOOLS, KINDERGARTEN TO GRADE 12

“Community-connected experiential learning is an approach to student learning that provides students with opportunities to participate actively in experiences connected to a community outside of school (local, national, or global); reflect on those experiences to derive meaning from them; and apply their learning to their decisions and actions in various aspects of their lives.” 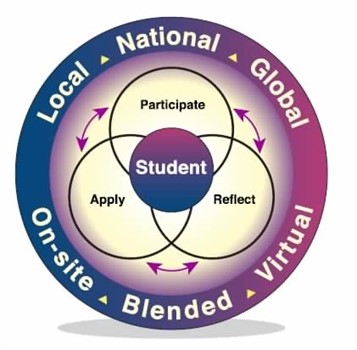 “Three questions – What?, So what?, and Now what? – are associated with each stage of the process, respectively, and help to focus students’ thinking and drive the process, as follows:

Reflect: So what? Students think about their experience, guided by reflective questions and prompts, and identify what they learned as a result of the experience – about themselves, other people, the world, their opportunities, or the subject of study.

Apply: Now what? Students describe how their learning stimulates further inquiry; how it has influenced – or may influence – their decisions, opinions, goals, and plans; and what they might do differently if they have a similar experience in future.”

“Experiential learning requires educators to provide explicit instruction in the skills of reflection and to assist students in developing the habit of looking for learning that can be drawn from all life experiences. Reflection is a strategy that develops skills of metacognition – the process of thinking about one’s own thought processes. Metacognition includes the ability to monitor one’s own progress towards achieving a learning goal, a skill that is reinforced in curriculum expectations and assessment policy (assessment as learning).” {Source} 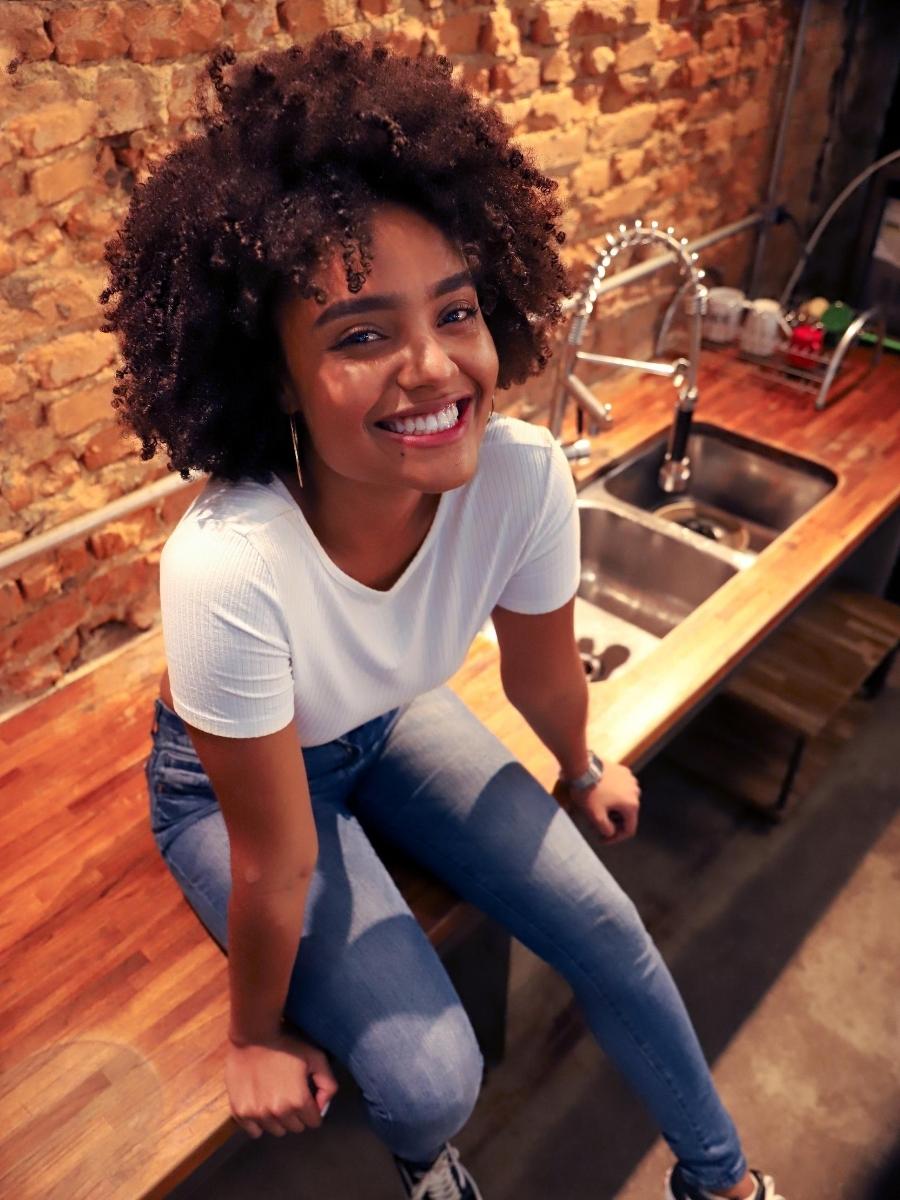 Over the past 17 years I have been unlearning everything I know about education.  I have read books, I’ve watched documentaries, I have taken courses, I have attended conferences and I have reached out to other educators, I have experimented in my classroom and now I am starting a new journey into opening up a virtual high school.  Three years ago I was inspired by one of my students to start writing a blog.  I wanted to chronicle mine and my students’ journey through our unlearning journey, you can check it out here if you are interested.  I wanted a place where educators who were curious had the opportunity to peek inside my chaotic classroom and see that change is messy, crazy, exciting and scary but totally worth it.

In my unlearning journey, I have realized that I am a lifelong learner and want to continue my quest to make our education system better.  I want my unlearning to continue and I want to continue to get better for my students.  Therefore I have decided to start a video podcast where I interview amazing people from all around the world, in all kinds of different roles to hear about what they do, what their thoughts are on our current education system and finally what they feel needs to change.

Thanks for continuing to unlearn with us. 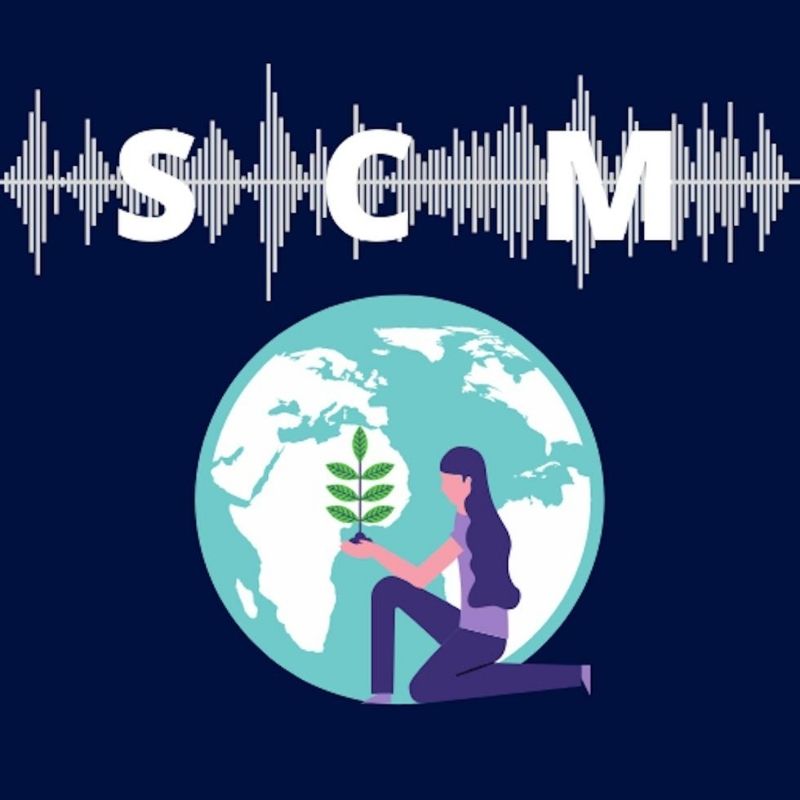 Barbara Carey Chair, Board of Directors

Barbara Carey was born and grew up in Hamilton, Ontario. After highschool she attended Teachers College and taught for 5 years with the Hamilton Board of Education and married her husband Brian in 1970 and celebrated 50 years of marriage in 2020. Barbara stayed home for 10 years to raise her daughters, Lousie Carey and Rebecca Chambers, who now have families and teaching careers of their own. She returned to teaching in 1981, studying at night and during summers at McMaster University and obtained a BA degree in History. After retiring from teaching in 2009, she enjoys family including her four granddaughters, helped care for her now 99 year old mother, took on leadership roles at Marshall Memorial United Church and has been fortunate to travel to many parts of the world. Barbara brings an expertise in the education system of over 30 years and is an active volunteer in all the R.I.S.E. program.

Brian Carey Treasurer, Board of Directors

Brian Carey was born and raised in Hamilton, Ontario. After choosing the trade of machinist in highschool, he was hired as an apprentice at a Hamilton company Smart, Turner and Hayworth. The apprenticeship included three years of night school and a fourth year at George Brown College in Toronto. During this last year he changed his employment to Fred Hall and Sons machine shop. He earned his machinist license in 1970 and worked for this company for 35 years, retiring as Superintendent of Operations in 2004. Brian married his wife Barbara in 1970 and they celebrated their 50th Anniversary in 2020. They are proud of their two daughters Louise and Rebecca and their four granddaughters. Brian has a passion for golf, boating and has travelled to many parts of the world. Brian’s business background will be an asset to R.I.S.E. Academy as it gets started, expands and grows.

Chad Chambers Board of Director

Chad Chambers was born and raised in Hamilton, Ontario. After highschool he left home to find himself on the ski hills of Banff, Jasper and eventually landed in Victoria, British Columbia. It was here that Chad fell in love with horticulture and landscaping. In 2002 Chad moved back to Ontario to pursue his passion at Algonquin College where he completed the Horticulture program. While in school, Chad started up a landscaping company for summer employment which eventually led to the beginning and incorporation of Serenity Landscaping Inc. Chad runs Serenity Landscaping as his full time job and for the last 7 years has also taught in the Horticulture Program at Algonquin College on a part time basis. He has been married to his ambitious wife Rebecca Chambers since 2005 and is an active participant in the lives of his two daughters. He spends the majority of his free time on the ice either playing hockey, coaching the two girls teams or building an amazing rink in the backyard.